Thoughts on the Week: June 3rd-7th

This week was all about prototyping.  I spent some time sketching possibilities but the majority in the PDL playing with the materials.

To start off, I chose to stick with pvc piping at my major material because of the relative affordability but more because it is circular.  This means that the pvc can support the lenses on all sides for security and protective purposes.  I thought about using some sort of wooden aperture but that would require more complexities than I was willing to deal with when the pvc already had so many benefits.  An additional (minor) advantage to the pvc is its durability.  There is no need to worry about it rotting and it can handle water.

My first idea was based upon an observation I made with the pirate scope- at the end there were two difference sized PVC pipes with a lens sandwiched between the two.  I thought that I could do something similar in order to stack the lenses- slide one in and then use the smaller pipe to guide it to the end of the tube.  This way it would be easy to get the lenses close together to reduce stacking error which was a concern expressed earlier; additionally it had the advantage that the lenses would be oriented straight as all of their centers would be touching simply because of how they are curved.  The major downside to the design is that the transition between prescriptions required a total reset of the device meaning withdrawing the small pvc inserting another lens and then re-inserting the lens.  Additionally it was incredibly hard to remove the lenses.  Overall it was not thought through.

Thus for the next design for better ease of use that maintained the closeness of the lenses, I opened the pvc piping by removing ¼ of the circumference.  I still used the idea of using two sizes of pvc- the larger diameter one served as a holster for the smaller diameter pvc.  Anyways, the design allows for individual lenses to be slid up against an eyepiece for the patient to rest against their face.  The individual lenses are adhered to the outside of a ring of smaller diameter pvc.  This aspect of the design quickly changed when I actually cut circular lenses- simply sanding them down and forcing an interference fit was a more secure and easier way to fit the lenses.  The problem with this design is that there was no way to stop the lenses in their pvc shell from ‘wobbling’ back and forth; they fell forwards if the tilt of the patient’s arm was too much; additionally it was a challenged to slide the lenses out once they were in place.  In order to fix this last problem, I added a handle (for now they are popsicle sticks but the idea is still there) to the shelled lenses.  One of the benefits of the handle is that the lens prescription can be written on it to identify it instead of just using the loose lenses.  However, there was still the problem of the lenses falling forwards or backwards.  Since the sliding was problem in the sense that the lenses were hard to get out, I opted to make another design which had the same characteristics only I used ¼ of the circumference of the full large pvc (as in I used the scrap from my cut earlier to make a new ‘base’).  Although it eliminated the sliding problem because the lenses could be removed vertically, they were practically falling out of the holder in all directions now because the ‘walls’ were too low. 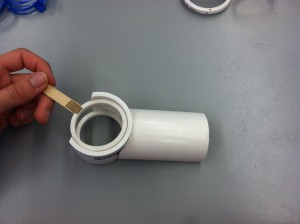 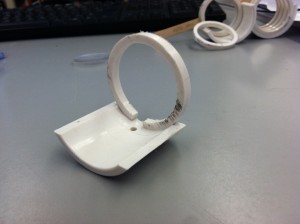 Talking to Paden and Marco

The conversations with Paden and Marco reaffirmed the problems foreseen with the diagnostic tool before the trip began.  They indicated the following difficulties during the diagnostic process:

After thinking about what Paden and Marco had to say about the diagnostic tool’s shortcomings, I decided to stick with the idea of making a modified phoropter because of the relative success of the trial lenses.  We want to use a similar method as the single trial lenses but affordability is an important factor; by finding a way to stack the lenses we may be able to eliminate the need for an entire lens kit.  Additionally, I have to focus on a method that allows for quick transitions between two prescriptions (my second/third design follows this criteria so I planned to modify these

For example, a set of lenses from -3 to +3 (whole numbers only) and a negative and positive 0.5 would account for prescriptions of -6.5 to +6.5 in increments of 0.5 diopters. With 8 lenses, we hope to be able to achieve 27 possible prescriptions.  This would mean that a maximum of 3 lenses would have to be stacked.  Again the factor of stacking error remains- how big of a problem could it be (ask Dr. Bob Lipski later).

Anyways,  the next prototype idea came from looking at a hairclip.  I thought that the pvc pipe with grooves could serve as the bottom of the clip which would hold the individual lenses and then the top part would come down to secure them in place.  This design allows for easy switching between the lenses.  After building this prototype, I found that the design was simply too complicated and it was hard to get the top to align well with the bottom when lenses were in place. Additionally, it was not as quick of a transition between lenses as much as it was anticipated.  The lenses didn’t even sit straight…thus another simpler idea was drafted.

This design ended up looking more like whale bones.  Two sizes of pvc were used- the larger served as a base (it was cut in half so it looked like a longer U).  From there the smaller diameter were cut into ¼ ‘’ rings which were adhered to the inside of the larger pvc half base at measured intervals.  This created a slot system for the lenses to slide in and out of the structure easily and efficiently.  The biggest cause for concern with this system is the spacing between the lenses. 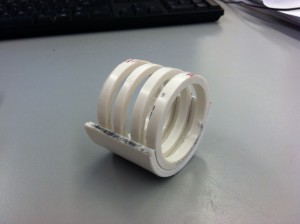 The next idea was based directly off of the phoropter itself with its ability to flip through lenses.  I simply screwed a hole through rings of pvc and used a bolt to secure a screw and the rotating lenses so they could rotate through the range.  The problem with this is that there are WAY too many lens stacking combinations and since the order does matter there could be major stacking error issues

For example: stack -1, -2, and 0.5… if the combination of -1 and 0.5 were the best combination then there is a large gap between them so the prescription yielded by this combo is misleading

Anyways, the rotational aspect of this design was nice in the fact that transitions are quick and easy.

From this design I combined the whale bone design with the rotational one.  For the first two lens ‘slots’, I used the whale bone design but for the third possible lens, I made a figure 8 rotating wheel that would be for refinement purposes (the intention being that the -0.5 and +0.5 diopter lenses would go in the wheel part).  The ease of use and quick transition between prescriptions shows promise; additionally some of the stacking error can be eliminated with this method because the lenses can be closer together. 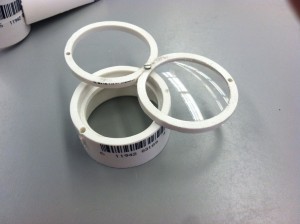 Meeting with Jamie, Haley, and Bob

During this meeting, we watched a PowerPoint presentation of pictures and videos from the trip to Guatemala.  I have to say that this presentation and the stories that were told really put this project into perspective for me.  It was exciting to see that despite the difficulties encountered, the work done by ProSEC did have a positive impact on some of the locals.  Again the difficulties of the diagnostic tool were expressed and alternatives suggested.  According to Dr. Bob Lipski, the stacking error should not be a huge problem with the designs he was shown.  He even commented that he stacks 3 lenses on a daily basis in his office sometimes during refraction.  However, he did warn not to go beyond 4 lenses.  One other suggestion made by Dr. Lipski that I think is worth mentioning is that this tool does not need to be exactly perfect considering the conditions under which it will be used.  I have been worrying so much about minute details that I haven’t been focusing quite so much about the big picture.  In prototyping I have been so focused on things like stacking error that I think now was a waste of valuable time.  Anyways coming back to the meeting, Dr. Lipski also suggested that I come to his office so I may learn the basics of spherical retinoscopy as well as get the chance to see what he does on a daily basis.  I know that this will help me in my own understanding of diagnostics and additionally provide invaluable experience for the project for me.  Professor Kim also mentioned that once a prototype is agreed upon (hopefully midsummer) then the remainder could possibly be spent in the testing stages.  This way we can get a solid measure as to whether or not we are headed in the right direction.

Finally, during the meeting while Dr. Lipski and Haley were taking a look at the prototypes that I had worked on during the week, Professor Kim suggested the idea of building upon the last design described before the meeting.  My next step is to alter this design to make a simple eye-piece with 2 or 3 rotating wheels (exactly like a phoropter) with the different lenses in them.  Once created, the new device will be nicknamed the ghetto scope courtesy of Professor Kim.

One other thing that I have to consider is that it may be hard to find pvc piping in Guatemala so perhaps I could make wooden wheels? This will be taken into account after the pvc model is made however.

All things considered, this was an incredibly productive week for ProSEC and for me personally.  In addition to working on the project, I was able to obtain my PDL badge and actually get my hands on some materials.  I also learned the value of having the machines and the machinists who work them as hand sanding, drilling, and cutting are far less efficient and accurate ( not to mention physically tiring…yes I did indeed try to use a hacksaw and sand by hand at first).