I filled out the IRB application completely and the essay answers can be found in the drop box- go to Approtech then IRB and 2013 application.  All of the documentation that goes with the application is there.  I know editions are necessary but this is progress thus far.  Whenever you get the chance, take a look at it even if it’s when you get back.  I still haven’t figured out which targets I am going to end up using; I did make  a colored astygmatism wheel (see below- it is not to scale but you get the idea).  It works fairly well but I still prefer the standard bi-chrome chart (but that still leaves the problem with astygmatic patients).  Additionally, for the other target option, I am thinking we stick with the astygmatism wheel (plain) and then have the bi-chrome test chart just next to it that way we can use it for refinement purposes right then and there without having to change targets.  That way we also get a better gauge if the bi-chrome test has any measurable effect as compared to past results.

As a random side note, after playing with the tools and simulating what it would be like to be a patient and found out that my tool eyepiece is actually too large.  When I tried to place it properly against my eye, I couldn’t because the tool hit my nose.  Thus I have to make new ones that are smaller so that the patient can center the eyepiece so that they see through the center of the lenses (which is not really possible with the current prototype unless you hold it away from your face a bit- but this is a source of error that needs to be minimized for optimal potential according to Dr. Lipski).

Another update for the week is that the lenses finally arrived at Dr. Lipski’s office (however I did not get the email until 1:30 which was after he closed for the day).  Thus once I get back, I will be able to make the actual diagnostic tools.  I want to re-size them though so that they do not hit the nose of the patient, especially before I cut the lenses.

When I come back, I need to make a ‘formal’ set of procedures and do a mini-trial run with perhaps some teammates to find out what works and what doesn’t (after the tools are ready to go).  I have the bulleted list in another post which describes what I want to do, however I have not come up with instructions to give the subjects or figured out the where, when, who…etc. which will all need to be planned once the IRB application is accepted (I did not submit it yet simply because I want Professor Kim’s help with revisions and suggestions.

In summary, this week was mostly about figuring out a testing methodology and getting closer to the testing process.  We now know that we want to test 2 different targets and all 3 devices for a total of 6 tests per subject.  I tried out multiple targets ( see second picture) to see which combinations seem to work more effectively than others and I found that the duo-chrome is actually very helpful because there is the comparison factor between the letters with different background colors instead of almost blindly guessing with the plain clock from before.  I thought I was going to be able to see Dr. Lipski again this week but circumstances did not allow for another meeting. 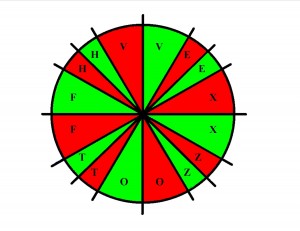 Colored Astygmatic clock- we can ask patients if they have a preference between the different letters of if there is a set of letters or lines which are more distinct than the others.  In theory I feel like this could work but I want to ask Bob’s opinion first. 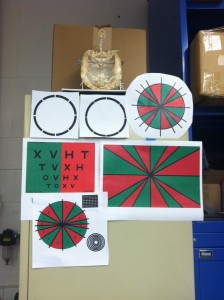 These were a few of the targets that were moderately successful- the one in the bottom left has a grid and a bulls-eye pattern that I expected better results from meaning the point of clarity would be easier to recognize, however this was not the case.  Additionally, for an astygmatic patient, this type of grid could look incredibly skewed and be difficult to use; thus I stuck with the clocks.  In the upper left, there are two rings with varying thicknesses and ‘hole’ sizes that I thought would look more like a ring when unfocused and then when in focus the gaps would be distinct.  Again there was a problem recognizing that initial point but I did find that the thicker lines with smaller gaps gave me less trouble than the opposite conditions.

One thing that I did by accident is that I used one target like the plain circle targets and then then moved to scope to focus on the duo-chrome targets, made the adjustments based on color preference, and then read the prescription.  This yielded much more consistent results than using the targets by themselves (minus the colored clock with letters- bottom left).