While I am waiting for IRB approval, I have a few things to get in order before testing actually starts.  I need to turn the general testing procedure into specific steps (like write out a formal step by step procedure for each subject), make the tools (cut the lenses), and recruit for the study.

Yesterday and today I focused on making the tools.  The problem I have come across is how to cut the lenses spherically.  I have done all that I could to avoid using the lens grinder made by Paden simply because he isn’t here to explain what to do and I’ve never used a router before.  First I went to the staff at the PDL; they suggested a multitude of different things all of which involve their assistance.  The catch is that they cannot help until next week…One of them suggested that I use the laser cutter which I thought was impossible because the lenses are polycarbonate.  However, they said I could if I wrapped the lens in tape; one of the staff came up and showed me a way to do this.  However, the method didn’t work as I was left with a charred and smelly mess.  Theoretically (he explained), it should have worked but our laser cutter is in such bad shape that it failed miserably.

I need to make these tools now and the only option left (that I see) is to use the lens grinder.  Thus I spent the past couple days ‘messing around’ with it and learning to use the device.  The first couple of lenses were disastrous as I was more afraid of using it than anything else; it didn’t help that I was going off of watching Paden use it months ago.  I made a ton of mistakes like trying to cut the lens in the wrong direction; the device jerked badly and I quickly adjusted what I was doing.  After cutting a few lenses, I can say I have improved significantly. Once I get confident enough at using the device (probably tomorrow – that’s the goal), I will cut the new spherical lenses from Dr. Lipski.  I only have one set of lenses currently due to ordering mis-communication but that’s only a temporary set-back.

Keeping this in mind (that I want to finish the pinwheel device first and in the next couple days- I’m already behind what I originally planned), I realized I had to come up with a modified procedure to cut the lenses.  I used the laser cutter to make a template for just like Paden did for the spectacle shaped lenses.  I cut a hole in the middle (with the laser cutter) so I could properly center the adhesive pad on the metal block (the one that holds the lens to be cut and the template).  I used the laser cutter to make something that made the placement of another adhesive pad in the center of the lens to be cut.  This is the tricky step because the lens is obviously curved and finding the center is critical to the placement of the cut.  I took a couple of pictures to show my simple method: 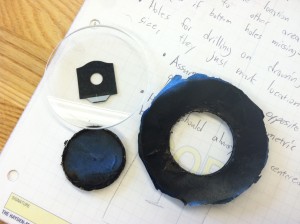 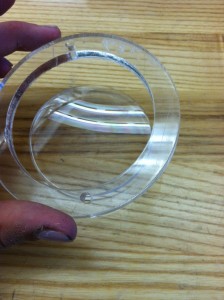 first I popped the lens to be cut into a holder 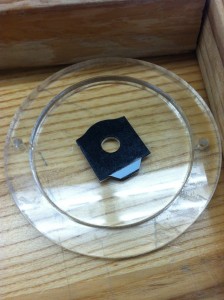 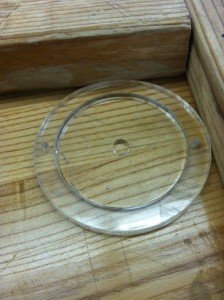 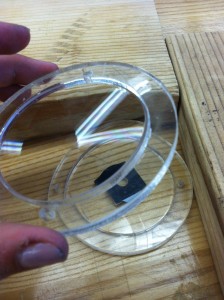 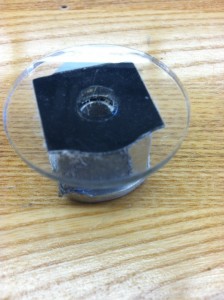 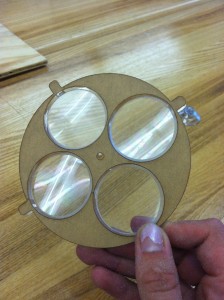