We’re sitting at an internet cafe eating breakfast at the moment, drinking some wonderful coffee. Internet connectivity has been shaky here- we apologize for the lack of updates!

Sunday we started off the trip with a bang by sampling Guatemalans at a local church in San Pedro. With the help of our  friend Arnulfo, we were able to set up some informal interviews, record the percentage of people with glasses, list the styles of glasses that we saw, and take photos. We had tons of people willing to talk to us- which was overwhelming but provided us with some great conversations. 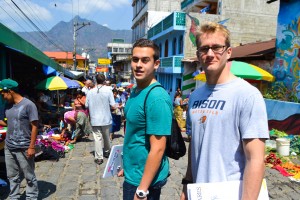 On Monday we gathered data about how many people wear glasses (out of the general population).  Each day we’ve been improving our coding system to mark various characteristics of glasses. So far, we’re seeing that people are wearing metal frames that are in the shape of ovals and rectangles- and some people have rimless glasses or transitions glasses.
Alright- off to collect data. We’re splitting into two teams and having a competition to see who can collect the most surveys. May team Joel- Alex- Haley be victorious!